We are excited to announce the Gulf of Mexico Alliance has received recognition for its role as a key partner in two projects at the recent 2022 Gulf Guardian Awards ceremony hosted by the U.S. Environmental Protection Agency’s Gulf of Mexico Division. Both awards were in the partnership category.

The Gulf of Mexico Seagrass Community of Practice received the third-place award, recognizing work to identify information needs, share resources, and implement best practices related to seagrass monitoring, conservation, and restoration. The Alliance and other partners have supported this effort over the last five years. Lawrence Handley and Catherine Lockwood, co-leads for the Community of Practice, accepted the award.

“The Gulf of Mexico is a vulnerable ecosystem that requires innovative approaches and proactive measures to protect this national resource. Over the past two years, the Gulf Guardian award winners have continued to think ‘outside of the box’ during challenging circumstances due to COVID-19. These Gulf Guardian Awards are an important way to recognize the valuable efforts of all their hard work to protect the environmental health of the Gulf of Mexico,” said Marc Wyatt, director, Gulf of Mexico Division.

The EPA’s Gulf of Mexico Division developed the Gulf Guardian Awards in 2000 to recognize and honor the businesses, community groups, individuals and agencies that are taking positive steps to keep the Gulf healthy, beautiful and productive. 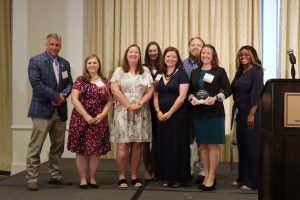